[Lots of interesting data][link]. As [a commenter notes][comment], the “ratings” metric should be taken with a grain of salt. Instead of defaulting to “no” stars (and possibly prompting the user to choose a rating if they’ve not done so) the App Store defaults to 1 star. Since it doesn’t require you to select a star, there are a lot of positive-to-middling reviews with 1 star ratings.

[Safari 4’s public beta][beta] has a lot of problems, and while it is “beta” software, I have a feeling that many of it’s biggest usability problems are set in stone. For a company as large as Apple, who releases software how Apple releases software, the “Beta” label means that “we’re pretty close to done, here”. They aren’t going to change the UI very much. Stuff like the awful “tabs-in-the-titlebar” is most likely not going to go away. There are some big issues, and to me, these are the biggest:

## At A Glance, The User Cannot Easily Find The Title Of The Page They Are Currently Reading

In versions of Safari previous to 4, the tabs were organized in the (thus-far) standard way: below the menu and title bars, like this: 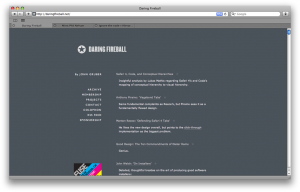 While not optimal, it works. Like any other application, the user can simply glance at the top of the current window to see the title of the page/document they are currently browsing. For comparison, here is a screen shot from Pages, a part of Apple’s iWork suite: 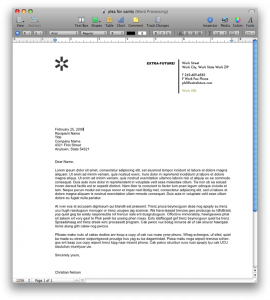 The current document’s name is presented in the top, middle, of the window. This is, as far as I’m concerned, Good. Some might see this as a bad comparison. Pages does not group disparate documents into a single window, like Safari does. That is beside the point, here. The point is that this is what users are *used to*, because it is how it works in *nearly every other application*. 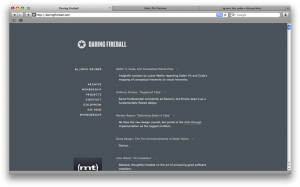 Since the tabs are organized not by any set criteria, but simply by the order they were opened in (or a later, user-defined order, which may be just as informal), the user must now distinguish between not only the two type of tabs (the currently active one and the inactive ones) but having done so, has to hope that the title fits within the tiny space alloted to each given page, active and not. You can see how this gets a little crazy if you’ve got more than 2 or 3 tabs open, or Cthulhu save you, [multiple Safari 4 windows open][multi]. This is Bad. It’s so bad, in fact, that I hope it’s just some kind of placeholder.

Again, Safari 3, this time the top left of the window:

The window controls (Close, Minimize, Maximize), while they are integrated with the title bar, are clearly part of the window itself, and not any one tab. Now let’s have a look at Safari 4 again, this time the top left part of the window, with the new-style tabs:

What is the average user meant to make of this? There are now, effectively, two “close” buttons in close proximity to each other, neither of which is separated from the left-most tab. Their icons are different, but not so different that one could easily tell which is which without knowing a whole lot more about the Mac OS than any random user does.

There is plenty more in the Beta that is worrisome, but these are the two big ones, for me. I hope that by making my issues public that it will push Apple to re-consider some of the planned changes for Safari 4’s release, though I doubt it very much.