Similar to [backing up your 1Password library with Dropbox][1pass], comes in [this tip for Yojimbo][link]. Essentially the trick is to move your Yojimbo data to the Dropbox folder, then put up a symlink in the old folder location, like so:

I don’t see why the technique employed here couldn’t work for any number of applications that use a centralized data store.

Since the writing of this post, [1Password has added built-in Dropbox syncing as a feature][feat]. As such, the following information is no longer useful and is left intact for historical purposes.

*The following post was inspired by the recent postings of [Merlin Mann][merlin] and [John Gruber][gruber] RE: Why you need to be backing up your stuff as often as possible. If you haven’t, you really should give ’em a read.*

If you’re as avid a user of the excellent password/login-storing app [1Password][password] as I am, you probably spend a decent amount of time trying *not* to think about what might happen to you if the application or it’s database were to suddenly go bad.

Ah, you’re probably thinking about it now, huh? Sorry about that. Like [the game][game], important data loss is not something you want occupying your brainspace, and yet there it is. Waiting. I come here not to terrifying you, though I may do that on purpose later if there’s time, but to help you out. You might not know it, but 1Password provides a daily keychain backup function from within the 1Password itself, and when melded to the also-excellent [Dropbox][dropbox] online backup and file sharing system, it can be made to automatically backup your 1Password database offsite, *for free*. Here’s how.

**Prerequesite** Um, I am assuming you use Mac OS X and 1Password already. If not, you can pretend none of this ever happened. I won’t hold it against you. Much.

2. Navigate to **Your Home Folder → Dropbox** and create a folder called **1Password**. 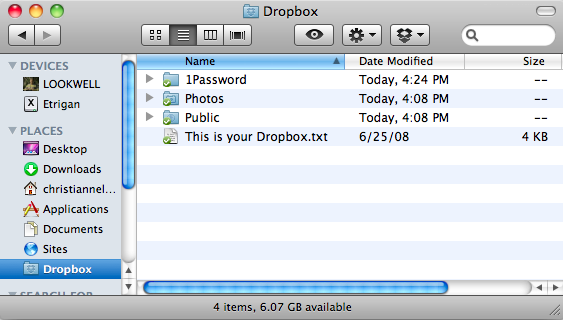 4. Click the **Backup tab** in the **preferences window**, and then the folder-selection box under **Backup Folder**.

5. Select the **1Password folder you created in step 2**. Click the poorly-named “Open” button in the bottom right of the window, or just hit return. Either of these will save you selection. 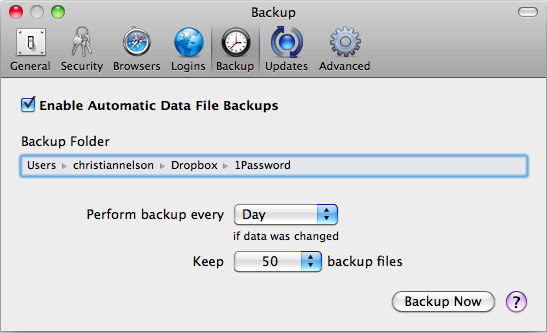 6. Click **Backup Now** to make sure it works. Wait a minute. If it works, 1Password will open a Finder window with your newly backed-up files.

8. Sleep the sleep of the just.

The average Mac user probably doesn’t mess much with the powerful (but almost entirely un-friendly) Unix underpinnings of OS X, nor do they generally need to. Sometimes, though, the tools provided in the shell are so useful, that it’s worth taking the plunge. Keeping a good backup of your iTunes music folder is, in my opinion, one of these times. To do it, we’re going to use one single line of code, and a unix command-line tool that is built-in to OS X: `rsync`.

This tutorial makes a couple of assumptions. Firstly, this might work on versions of OS X before 10.4 Tiger. I haven’t tested it, so I really don’t know. So we’re going to assume you’re using 10.4 or newer. Secondly, I’m going to pretend that you’ve kept iTunes at it’s default setting, and it is keeping all of your music files where it usually does (in `/Users/yourusername/Music/iTunes Music`). Third, I’m going to proceed as if you want to back up your music from one drive to a second drive. It doesn’t matter if it’s external or internal, beefy firewire enclosure or USB thumbstick. So long as it has enough space. For simplicity sake, I’m going to call them `Main Drive` and `Backup Drive `. Let’s go.

The first thing we need to do is make a directory on your Backup Drive to keep your backed-up music in. Open the Finder, and click on your backup drive in the sources list, on the left. The sources list looks something like this:

Click on whichever drive you want to use as a backup, and create a new folder there (*command+shift+n*, or click File and New Folder in the Finder menu). Call it “Music Backup”.

Now we’re going to use the Terminal. Open the Finder, and navigate to Applications -> Utilities and then double-click the Terminal application. It’ll open up and give you a nice blank screen. I’m going to show you the command we’ll be using, and then I’m going to explain it. It won’t take long. Here’s the command:

We’re calling the command `rsync`, here, a very quick and powerful synchronization tool. The `-rvv` tells rsync to *recursively* go through directories, and be *very verbose*. Very verbose means it’s going to tells us what it’s doing for every single file it goes through, so we can make sure it’s running smoothly this first time. The next time you run this, you can safely omit the `vv` part without worry.

Here’s how we build the command: In your terminal, type in `rsync -rvv `. The space after `-rvv` is important. Now, open up your Finder window, and click on the Music icon in the lower left. This will bring you to your music folder. There should be a folder here called iTunes. Click on the iTunes folder, and drag it on top of your terminal window, and release. OS X is so clever that it automatically copies the directory’s path into the terminal window for you. In your terminal window, put a space after the directory name that’s just been added, then, using the Finder again, navigate to the Music Backup folder we made in step one, and click and drag it onto the terminal window in the same way. It should, again, look something like this:

Take a second look to make sure your terminal looks like that, and then hit he return key. If it works, you’ll see rsync dumping it’s output onto the screen very quickly, and you probably won’t be able to read it. If you’ve got a lot of music, this could take many minutes. A beer may be in order. When it’s done, it will say something like this, and stop scrolling:

What the actual numbers say isn’t important for our purposes. That just means it’s done. To make sure everything worked out okay, you can open your Music Backup folder in the finder. It should have all sorts of stuff in it, now. If all went well, your music is backed up, and you can close the terminal application.

Yep. Simple, eh? The coolest part is, each time you run it from now on, it only copies the files that have been changed, drastically reducing the time it takes to back things up. `rsync` also has the capability to back things up from remote servers (like a web site, or another computer of yours), which you can learn all about in [the documentation][docs]. For now, though, you can just enjoy the security of knowing that the odds of losing your entire David Bowie collection are effectively halved.