*For those of you confused about the dates in the BTTF movies see my update below.*

Back To The Future first arrived on cinema screens 25 years ago. When I was a boy, most kids wanted to be Michael Jordan, or the President, or maybe an astronaut. I wanted to be [Doctor Emmett L. Brown][doc]. 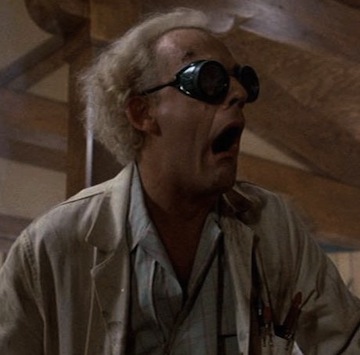 He was the wonderful scientist-of-all-trades in 1985’s [Back to The Future][bttf], played by the inimitable Christopher Lloyd in what has been, thus far, his finest role on the screen. I doubt he or anyone else will ever top it. As a child, I didn’t want to be a scientist, I wanted to be *that* scientist. Doc Brown just *knew* stuff about pretty much everything, and while being a little scatter-brained (with the knowledge of real, working, time travel in their head, who wouldn’t be?) was unquestionably brilliant, if not a little short-sighted. 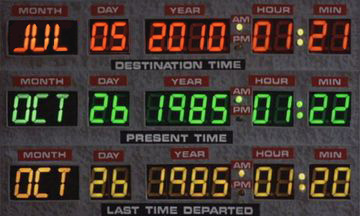 **Update**: In the BTTF film the time travel event takes place on October 25th, 1985. In BTTF 2 Marty goes to October 21st, 2015. BTTF was released July 3rd, 1985. For those wondering, [as topherchris was][topher], “how July 5, 2010 fits into this,” the Back To The Future DVD commentary: In it, Bob Zemeckis and Bob Gale (the director and co-writer of the film) explain that they put this in there as a sight gag, since July 5th was around when the movie was going to come out. It exists only as a little joke for keen-eyed viewers. Apparently it doesn’t.

**Update 2**: The original version of this post misused quotation marks around “25 years,” which has been fixed.

[Brought you by the magic of the internet (PDF)][link]. Of personal interest to me:

> NO STORIES ABOUT BATMAN’S ORIGIN

If only Hollywood would’ve listened. The document itself is full of reasons why Batman: TAS is still the best Batman-related media outside of the comics-sphere, but the above rings truest to me.