[Looks like a heck of a swiss-army-knife of a tool][link]. It’s node-based, supports CoreML image classification and sorting, and yep… it supports AppleScript. FM’s suggestions for new use cases contain fun, weird, stuff like “Read an image from the clipboard, apply a drop shadow, and write it right back to the clipboard to paste into another app.”

Retrobatch is available as [a 14 day free trial][link], and [licenses start at $29.99](https://flyingmeat.com/store/). Props to Flying Meat for being one of those third-party Mac development houses that just keeps going.

And they’re introducing what looks like the Yahoo Pipes of our dreams, Gomix.

A quick-ish post buy Eric Holscher, of [Read the Docs][rtd]. [I agree with all of this, therefore I am linking to it.][link] tl;dr: Have a website, not a directory of text files. Use prose, not auto-generated bullshit. Use permalinks. Have the language and version # in your URLs. Keep docs keyed to version #s.

[link]: http://ericholscher.com/blog/2014/feb/27/how-i-judge-documentation-quality/ “How I Judge the Quality of Documentation in 30 Seconds — Surfing in Kansas”
[rtd]: http://readthedocs.org “Read the Docs”

[Didn’t see that one coming][link]. I use Instapaper every single day, and I hope this keeps Instapaper around for a long time and frees up Marco to make more new stuff. From his post:

>I’m happy to announce that I’ve sold a majority stake in Instapaper to Betaworks. We’ve structured the deal with Instapaper’s health and longevity as the top priority, with incentives to keep it going well into the future. I will continue advising the project indefinitely, while Betaworks will take over its operations, expand its staff, and develop it further.

I’ve been in a similar place before; having a successful project that can continue growing but needs a bigger team and more resources, but you don’t want to make it your entire career. Marco, it seems, felt similarly before he made the decision to sell.

[link]: http://www.marco.org/2013/04/25/instapaper-next-generation “The next generation of Instapaper – Marco.org”

[A self-hosted, open source, Pinterest clone.][link] Built with Python, from the looks of it.

[“Read the TV and Movies you don’t want to watch,”][link] they say. Storyboard is a package that takes subtitled input videos and creates a PDF of every line and every scene change.

I could see using this for a lot of weird/interesting data analysis.

[A sort of counterpoint to App.net, Tent is a truly decentralized social media protocol][link]. It even integrated with Tor to help those in nations that which to stifle free speech.

It’s a protocol, like HTTP or email, not just a service. It’s fully open source. This is interesting. I hope that it becomes more friendly and stable and active than, say, Jabber.

[A write-up / retrospective by the primary author of Thief: The Dark Project’s 3D rendering engine][link]. An interesting historical curio, from the time just before hardware 3D rendering was commonplace. via [Shawn Medero][shawn].

[A great-looking update to the self-described “image editor for humans.”][link] I’ve been using Acorn since version 1, and I spend more time with Acorn and less with Photoshop every week.

[A jQuery plugin that makes reordering rows, sorting, and show/hide look absolutely great][link]. The plugin’s page is itself a perfect demo for the tech. At something like 2kb minified I’m wondering how I lived without it.

[This’ll make it a lot easier to socially tag our window gardens in the favela future:][link]

>FluidDB is a platform for the web of things, each represented by an openly writable “social” object.

[The Mac App Store][mas], not even 48 hours old, has already set off small ripples and large waves of change across the Mac OS X development space. From Thursday every single new Mac user knows the Mac App Store as the primary place to purchase software. Even long-time users such as myself will slowly adapt. In the not-too-distant future of Mac software development not being on the App Store will about the same as not existing at all.

Given that it is installed by default on every new Mac (and every Mac updated to 10.6.6), it comes as little surprise that many developers are moving to App Store exclusivity, forgoing the Old Ways of custom-brewed payment and serial number systems. For users this is basically only good. I click on the app, confirm I want to pay for it, and it’s there on my computer in the expected place. All done. No more worrying about [Disk Images .vs. Zip files][dmgzip], or any of the other dozen (now) archaic issues distributors and users of third-party software have had to deal with. As a person who buys software for his Mac, this is entirely a Win.

However, as a person who already owns a pretty decent amount of software for my Mac, there is a real turd in the punchbowl. For developers who have already created and shipped their apps before the Mac App Store existed, Apple has what some might call a “[sweet solution][sweet]”: pretend it didn’t happen. Apple provides no way for users of who have already purchased a software title to “migrate” this software to the App Store version. One of my own most-used pieces of software is a web developer tool called [Coda][coda]. It costs $99, which I’ve already paid, and is not a small sum. Were [Panic][panic], the developers of Coda, to decide to now switch to the App Store as the exclusive means of distributing their apps, I would be be shit out of luck.*

One needn’t resort to hypotheticals like the one described above. Two real examples of this are [CoverSutra][cover], an app for controlling iTunes which lives in your menu bar, and [TapeDeck][tapedeck], an analog-styled audio recorder. The developers of these apps are small and independent. Both of these developers have been on the Mac for some time, and previously used serial numbers to authenticate copies of their software. Both companies promised free updates (of some kind) to their applications for users who registered. Both developers are now moving towards App Store exclusivity, with one key difference: Sophiestication Software is dropping support for non-App Store users, including those who previously purchased the software and were promised free upgrades up to (not including) version 3.0. SuperMegaUltraGroovy, while discontinuing sales TapeDeck outside of the App Store, are continuing to support users who have already purchased the software with the (promised) free updates in the 1.x line.

SuperMegaUltraGroovy’s track is the hard one. As a small developer with very limited resources, supporting two payment systems is twice the pain. Odds are high that this will cut into their development time somewhat, and will most likely cost them money in the short-term. But I (and obviously, they) think it’s the right thing to do.

If the [comments section of the blog post announcing CoverSutra’s exclusivity][covercom] is any indication, their users feel the same way. Sophiestication promised purchasers of CoverSutra free updates until it hit version 3.0. Then, this week, version 2.5 was announced as an App Store exclusive application, cutting off those users who’d been promised the updates to 3.0. These users now feel cheated, and lied to. In their zeal to get CoverSutra out and on the App Store, Sophiestication has effectively fed a [shark sandwich][shark] to the customers who got them there.

We won’t know for a long time if their respective strategies financially hurts or helps either of these companies. We do know that one company has customers angry and being left behind, one doesn’t, and people have a habit of not forgetting these sorts of things. When dealing with users of any kind of software or service, sentiment is king. And right now, the prevailing sentiments for TapeDeck and CoverSutra couldn’t be more different.

* Luckily, [Panic has no plans to do so][fn1], and I’m not surprised. Their checkout/serial/support service has always been best-in-class for the Mac, and they’ve obviously got their stuff pretty much down.
[fn1]: http://www.panic.com/blog/2011/01/panic-on-the-mac-app-store/ “Panic on the Mac App Store”

Flying Meat, makers of fine Macintosh softwares such as [Acron (the image editor for humans)][acorn], [are selling t-shirts][link]. A Flying Meat t-shirt is your ticket to me buying you a beer.

[A progress and “what comes next” report for every active project from what is possibly the most beloved (and accomplished) Mac software house.][link]

[Too many good points to quote, just do yourself a favor and read it.][link]

[A fairly exhaustive list of tools for startups and individuals who live like startups.][link] Bug-tracking, performance monitoring, analytics, life, the universe, everything. via @kenseto.

[The smoothest forum package][link] you’ll find right now [hits version 2.0][announce] (finally). I missed this when it happened on July 21st, but better late than never.

I’m not sure if this is due to [Wikipedia’s new skin][skin] (with the “usability” enhancements), some other MediaWiki update, or if the problem is on Apple’s end (*Update*: [It is a problem with Wikipedia’s new skin][fix]), but this is another good example of why Apple doesn’t want to rely on third-party vendors for anything. 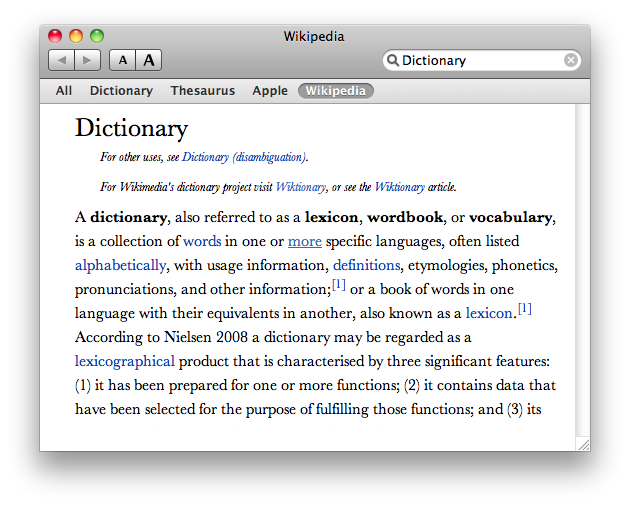 The image above is what I get when looking up the word “Dictionary” in Snow Leopard’s built-in Dictionary application, and clicking Wikipedia. The Wikipedia page is very long, and should have vertical scrollbars, but there are none.

*Update:* [Mac OS X Hints has information on how a “fix”][fix] which involves logging in to Wikipedia and setting your skin to use the previous one.

[This is the first commercial game I can think of taking this step][link] while the game is still live. All of the Ryzom source including tools, client, and server codebases are fully open source free software. For more, [see the FAQ][link]. It sounds to me a lot like a MUD codebase, and that makes me smile.

I do not see this helping them in the marketplace, but I’d like to see this become a trend. I have a lot of old PC games which are no longer playable due to DRM or other online components which no longer exist.