Just in case you needed more reasons that Facebook is a morally corrupt drain on our entire society, [Gizmodo went deep and forced FB to admit to this practice (after they denied it several times)](https://gizmodo.com/facebook-is-giving-advertisers-access-to-your-shadow-co-1828476051).

If you’re still working at Facebook…. why? Is the money _that_ good?

[Zeynep Tufekci with some strong medicine, for Wired](https://www.wired.com/story/why-zuckerberg-15-year-apology-tour-hasnt-fixed-facebook/):

> In 2003, one year before Facebook was founded, a website called Facemash began nonconsensually scraping pictures of students at Harvard from the school’s intranet and asking users to rate their hotness. Obviously, it caused an outcry. The website’s developer quickly proffered an apology. “I hope you understand, this is not how I meant for things to go, and I apologize for any harm done as a result of my neglect to consider how quickly the site would spread and its consequences thereafter,” wrote a young Mark Zuckerberg. “I definitely see how my intentions could be seen in the wrong light.”

>Mr. Grewal is right: This wasn’t a breach in the technical sense. It is something even more troubling: an all-too-natural consequence of Facebook’s business model, which involves having people go to the site for social interaction, only to be quietly subjected to an enormous level of surveillance. The results of that surveillance are used to fuel a sophisticated and opaque system for narrowly targeting advertisements and other wares to Facebook’s users.

People are finally starting to catch on that Facebook’s value proposition (“Tell us everything about you, all the time, so we can help get dictators elected around the world”) is pretty weak.

>[Thousands of third party apps were designed solely to obtain and sell your data. It’s no surprise that the data ended up being used again on Facebook, one of the biggest advertising platforms on Earth.](https://motherboard.vice.com/en_us/article/vbxgzb/cambridge-analytica-facebook-ad-targeting-third-party-apps)

[Sam Biddle for The Intercept][1]:

>When Mark Zuckerberg was asked if Facebook had influenced the outcome of the 2016 presidential election, the founder and CEO dismissed the notion that the site even had such power as “crazy.” It was a disingenuous remark. Facebook’s website had an entire section devoted to touting the “success stories” of political campaigns that used the social network to influence electoral outcomes. That page, however, is now gone, even as the 2018 congressional primaries get underway.

>”I don’t know if I really understood the consequences of what I was saying, because [of] the unintended consequences of a network when it grows to a billion or 2 billion people and … it literally changes your relationship with society, with each other … It probably interferes with productivity in weird ways. God only knows what it’s doing to our children’s brains.”

Gosh, I bet he’s keeping the millions of dollars he personally made off of all this, though, isn’t he?

[Facebook lies to your friends and says you “liked” pages that you haven’t if their advertisers pay them enough.][link]

Today I made a [series][first] of [seemingly][second] [innocuous][third], though slightly filthy, joke tweets based on a vaginal rejuvenation cream being sold in India.

[The Facebook thread][fb] (I have Twitter set to auto-post to Facebook) for the [third tweet][second] now has over 118,000 comments and 5,500 likes, and the comment threat is INSANE. This appears to have affected the posts of many, many people. The user who appears to be posting the majority of the comments (mostly replying with the single letter “r”) is identified as “Rahmi Özgündüz”, but that name (and the photo on the profile) belong to a [Turkish soccer player][turk]. It’s possible he/she/it started this, but without more info it’s hard to say. Could just be a regular ‘ol database ID bug.

This has got to be the problem of the day for some poor Facebook engineer. Sorry, dude. Or lady.

Update: [Ben Garvey][bg] has the idea that somehow a post ID has been duplicated across several different FB posts, which is making all of the comments be piled into one big thread. Sounds about right to me.

Update Two: The responses, at least the ones in a language I speak, are hilarious. They range from [incredulous][incred], to [indignant][indignant] to [pleas for sanity to the uncaring universe][pleas].

[Garrett Murray on a troubling trend in Kickstarter projects:][link]

>At least once a week I receive an unsolicited request to fund a project. These messages are rarely offensive in and of themselves–they’re usually just information about the project and a paragraph or two of generic “please help us out” text–but they’re still spam. They’re usually sent to a blind carbon copy list, but occasionally someone will screw up and send it out via plain CC, exposing all the email addresses they’ve targeted.

This is spam, plain and simple. Kickstarter needs to decide if it’s the kind of company who wants to allow this (in order to potentially make more money in the short term, ala Facebook, at the expense of user satisfaction and damage to their brand) or come down hard on it (do the right thing for their users AND backers). I know what I hope they do.

[Another big privacy / security win for Twitter][link]. They’re using a new feature in Firefox called, appropriately, “[Do Not Track][dnt]”:

>Do Not Track is a step toward putting you in control of the way your information is collected and used online. Do Not Track is a feature in Firefox that allows you to let a website know you would like to opt-out of third-party tracking for purposes including behavioral advertising. It does this by transmitting a Do Not Track HTTP header every time your data is requested from the Web.

Can anyone even imagine Facebook doing this? [“Do Not Track” is also available as an option in Safari 5.2, which is available to developers right now.][safari] (thanks, [Jesper][jesp])

[Dan Wineman shoves a hot poker up the ass][link] of Facebook’s “social authentication”:

>Captchas don’t verify identity. “Social authentication” challenges based on public information — especially information that the service itself provides, for free, to anyone who asks — don’t do that either.

The problem with “social authentication” is that second word, there. Facebook’s calling it an authentication method is dangerous because a false sense of security is… false. “Social captchas” just doesn’t have the same marketing chutzpah, I guess.

[The why is important, but more important is that they did it at all.][link] I’m certain that Facebook, MySpace, etc, got similar requests and complied with them without even thinking.

[link]: http://www.fastcompany.com/1716100/why-twitter-was-the-only-company-to-challenge-the-secret-wikileaks-subpoena “Why Twitter Was the Only Company to Challenge the Secret WikiLeaks Subpoena | Fast Company”

On the code-side, however, they are very much the product of two different companies with, I would argue, different outlooks on the web as a whole and HTML specifically.

There is no such thing as a `share_url` attribute in any published version of HTML. Facebook just made it up because they felt like it, and it was the easiest way for them to do what they wanted. They’re also mis-using the `type` attribute, here. `type` [should be a mime-type string][type], as specified in the HTML documentation, not whatever random data you decide will be helpful.

It would be possible to see these as harmless and (possibly) clever hacks, but this is not a startup based in a garage, this is a billion-dollar company with hundreds of employees. Philosophically it speaks to Facebook’s general lack of regard for the internet as a whole: Facebook does what it wants, and you can go fuck yourself if it bugs you. In other words: Who has two thumbs, [a $100 billion valuation][value], and doesn’t give a shit about your web standards pedantry? *This guy.*

Twitter uses the [HTML5 `data` attributes][data], which were created for specifically this purpose, which is embedding useful information in HTML without having to make up your own attributes. As a result, Twitter’s code is not only valid and logical, it’s ahead of the curve. Philosophically this says that Twitter considered the ramifications of this a bit more than Facebook has. This code will be embedded in millions of webpages, many of which will never be updated, so it matters in a big way that it be done *right*. Yes, the HTML5-style `data` attributes are a little bit *too* new for some people to get behind, but today isn’t the only thing that matters. Tomorrow is pretty important, too.

In total, what these buttons say about their companies is pretty simple: Twitter cares about being a good web citizen. Facebook? Not so much.

>So what’s happening here? Well, Facebook’s “Opt out of emails from Facebook” page is getting indexed by Google.

That means that the email address that Facebook shows you on the page is also indexed. Meaning it is spam-harvester heaven. The hits just keep on coming.

What is longer than the US Constitution and is comprised of over 50 settings and 170 options? [Facebook’s privacy settings][link].

Their [deactivation page][emo] is emotional blackmail at its most absurd: 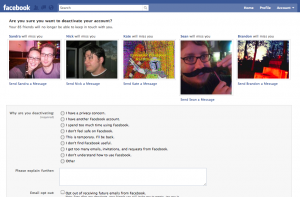 The National Lampoon was way ahead of Facebook in this department, as evidenced by this January 1973 issue of the magazine: 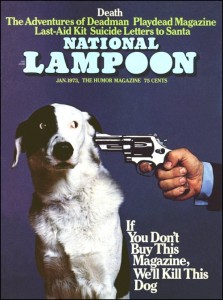 The Lampoon was joking, of course. Facebook not so much.

[Soren Johnson’s summary of Social Gaming / Facebook’s presence at SXSW,][link] what it’s doing to the industry, and what it might do to the future of games. Potentially very bad for everyone. My favorite quote is this, which I think sums up my real problem with [those fucks] Zynga:

>So many of the methods for making money are thinly-veiled scams that simply exploit psychological flaws in the human brain.

That, right there, is the problem I have with this stuff. It’s just *gross*.

[Oh, the points you will earn in the future][link]. I think saying the growth of Mafia Wars was driven by authenticity is a very silly, if not outright insulting. Authenticity is not something you can acquire.

[link]: http://kotaku.com/5479125/points-for-toothbrushing-the-gaming-speech-everyone-is-talking-about?skyline=true&s=i “Points For Toothbrushing: The Gaming Speech Everyone Is Talking About – Dice 2010 – Kotaku”

[Meaning you can add it to your dedicated chat client of choice][link]. The official site has instructions for Pidgin, Adium, iChat, and the ever-popular “Other.”

I think my friend [Shawn Medero][shawn] has the right attitude, “we’ll see how much I hate this.”

[What appears to be a PHP/C++ cross-compiler][link]. This could be some serious mojo for PHP. That name is awful, though.