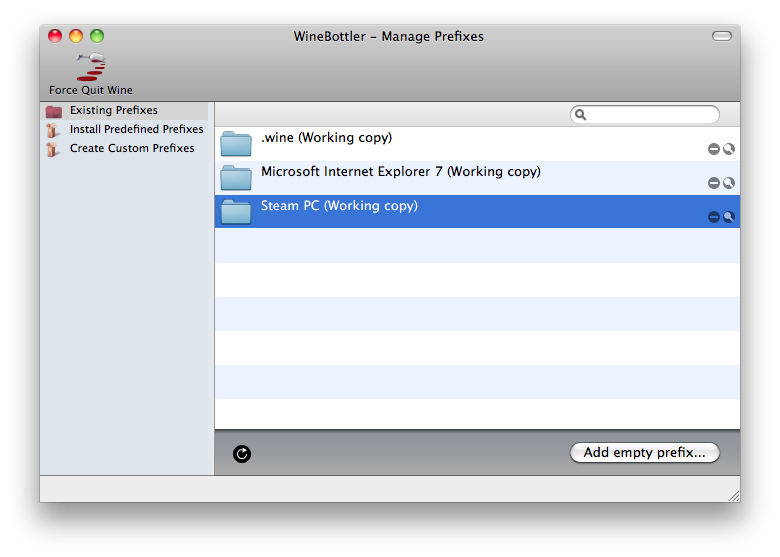 Very interesting. I had no idea Wine had achieved such stability.

I am afraid I will have to try this, despite knowing what a strain it is to resist Civilizations productivity draining spells.

I couldn’t believe it myself.

I went ahead and I was very impressed with Wine Bottler. This is indeed very convenient. Just a couple of clicks and Steam ran just brilliant. The only quirk though was that I did try to copy the downloaded game over from my Bootcamp partition – turns out you can just copy your steamapps folder – but Wine Bottler sneakily hid the C Drive not only in the clickable ‘bottle’ bundle it made, but also in an Application Support folder. Once I found the right folder that did work out quite well.

Unfortunately I did get a number of graphical glitches and flashes on my Mac Pro with an ATI HD graphics card. I’ll keep an eye on http://appdb.winehq.org/objectManager.php?sClass=version&iId=21465 and see what settings people figure out work the best.

i have pc civ 5, is there anyway for me to use steam to play it on my mac?

Yep, just follow the tutorial and you’ll be able to install and play Civ 5 just fine. Since your copy is already registered with Steam it won’t be a problem.

I get as far as the white screen following all directions perfectly but the white screen just stays up never going to the start screen even after 15 minutes. The top menu far is still visible and I eventually have to click out of X11to get back to the desktop. I have a new imac if that helps at all. Any ideas to what may be the problem?

Everything worked perfectly until opening Steam for the first time. It said that i needed an internet connection, but I am obviously connected to the internet. Any ideas for help?

Try disabling the introduction video. Go to your Documents folder and check for a My Games folder (Wine Bottler automatically uses your Mac Documents folder for ‘My Documents’ in Windows). Then open up the “Sid Meier’s Civilization 5” folder and edit UserSettings.ini. Set SkipIntroVideo = 1.

Just I quick question I got the everything to to work perfectly the first time I steam installed the game downloaded and played from the steam menu. the only problem was I couldn’t get steam to up back up instead I got an x11 command prompt screen. So what am I doing wrong so I don’t have to keep redoing the process over and over again

Did that and now the game wont open from steam, I hit play demo and then it says loading civ but nothing happens after that…

Okay, then I don’t know. Actually it works for me with or without the intro movie, but the intro movie does show up as white blankness so I figured it could have been the source of your problem.

When I try to open steam after installing it into applications nothing happens. It allowed me to create a login which worked because I received a confirmation e-mail. There is a loading steam box and then it just closes along with the whole program leaving just the X11 program running, any ideas?

Hi Phil, first of all thanks for your efforts doing accessible Civ 5 to all mac users. When I start the demo the characters of the letters are illegible. And after discovering what are each one of the options on the menu , is not possible to start playing because the game seems to be blocked just after the presentation of the civilization I’ve selected. I’ve this problem with both ways of playing demo that offers Steam (with or without DirectX). Thanks.

I’m having the same problem, so it’s not just you, but I don’t know what to do about it.

Also followed directions exactly and does not actually do anything when launching the created application. I have set Steam.exe and bin/x64launcher.exe as the startup apps, none of them work.

Sadly, this seems to be my normal experience with Wine.

OK, just in case others may have the same issue. I had to update to the latest version of Wine (I think the version bundled with WineBottler in the combo from the link above is not the latest. Now at least Steam is launching and trying to log into the account.

So, with the updated wine, Steam PC will run. It will download the civ V demo. It will start and take the 10 minutes to download Direct X 9. The full white screen comes up, and then an error dialog presented by X11, stating that the program has encountered a serious error and must close. No “My Games” folder is created to contain the setup.

That’s interesting – I used the version of Wine bundled with WineBottle and that did work for me without any additional updates. However, perhaps updating Wine can help with the remaining graphical glitch I have. How did you update Wine?

same problem as below… everything worked just fine from an install point of view – but it stays at the “complete white screen” (and I waited > 30 min.). any ideas?

how is the performance (especially after like 70, 80 turns?) and what quality settings are being used?

i don’t know my mac’s specs (i got a mac because i’m computer illiterate), but will Civ 5 work on my macbook circa 2009? If not, I guess i’ll continue to go out and see people. Sigh.

Yep, I’m personally using a MacBook Pro that I got nearly 3 years ago and it’s running just fine. It gets chuggy in the late game, but if you switch to the tactical view it runs great.

everything worked out except for the fact that when the game begins everything is grey, you can only see the menu and maps but nothing more….

Ian did you ever get a response or fix? I’ve got the same issue.

You have to set the terrain settings to medium. Worked well for me exept for lagging.

I’ve had the same issue at Ian123. I was able to create the Steam app, Install Civ, and it loads, however the map is all greyed out and I can’t see any of the units. Anyone find an answer to this?

I tried this and everything worked fine until I launched the game, the white scream came up as its supposed to but it has been there for the last 10 minutes and is still there.

[…] Nelson may have just ruined my life (or at least my marriage) by posting detailed instructions on how to play Civ 5 on a Mac. I suppose it was really only a matter of […]